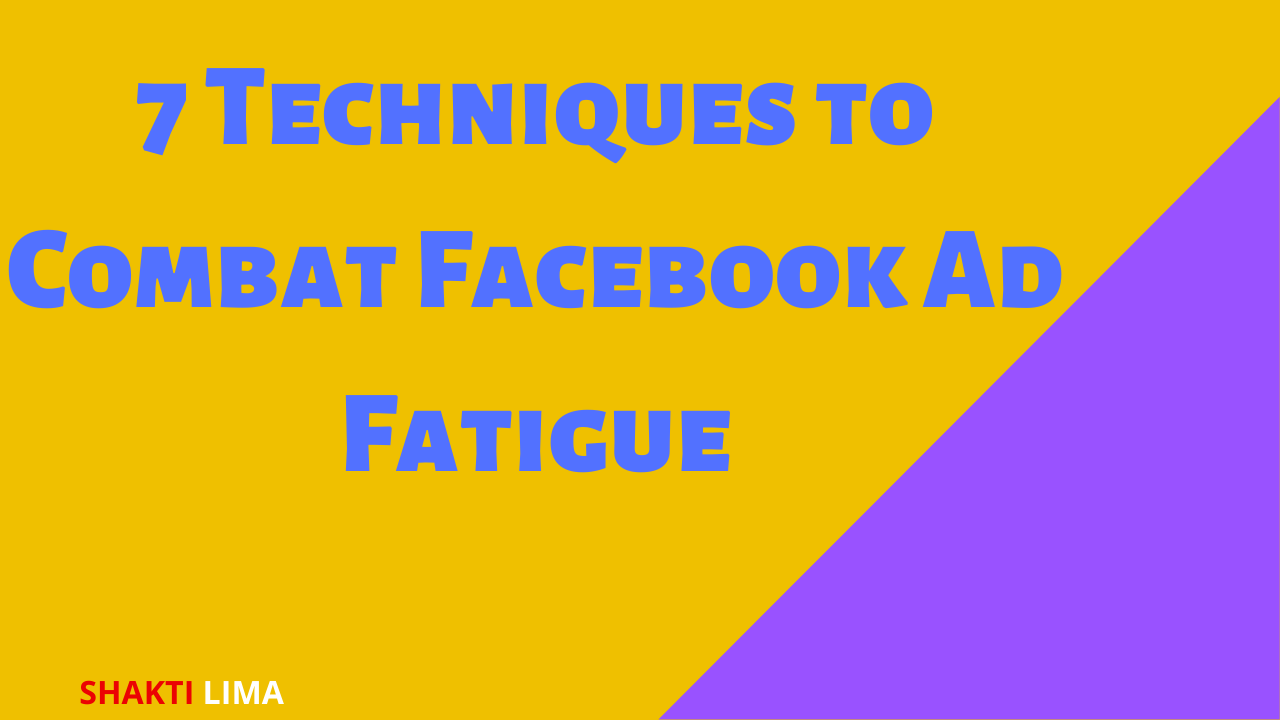 Techniques to combat Facebook Ad fatigue is something you really want to watch out for with your Facebook ad campaigns .Make sure that your target audience aren’t becoming bored with your ad .If they do your results are gonna drop off and they can drop off really really quickly when that does happen .

So we’ve got seven techniques here that can help prevent .

Refresh your ad creative, now this sounds like quite an obvious technique and it is but it’s worth including. So if you’ve got an offer that’s working for a product or a service that you’re not going to necessarily want to change. You’re gonna want to keep advertising it this work for in the past. But if you start to see that results are dropping off as your audience becomes bored with it you can refresh your ad creative .You can try using different images, try testing different headlines and that can give some more juice & give some more life to that offer .Also it allow you to run it a bit longer while generating great results.

Use a different ad format so it’s kind of along the lines of refreshing the ad creative but instead of just simply changing your image or your headline or something like that try and use a different format. So if you’re using static image ads you could try converting that into video. If that applies to your your products if you’re using video you could go to static images you could try slideshow ads or carousel ads. But try and change up the ad format because when your target audience see that ad again for another time they won’t immediately think “oh that’s just the same product or service I’ve already seen “and they’ll ignore it. They will give it a bit more attention because it looks completely different to the previous .

Change your target audience again quite an obvious one but worth including in this blog .If you’ve been advertising a particular product or service to a certain audience it’s been working well for a long time and you start to see a drop-off and results try advertising to a different audience .One of the best ways to do that is to use a look-alike audience so if you’ve got a customer list or an email or something like that upload that to Facebook create a look-alike audience based off of that and advertise to those people.

Limit your re-targeting budgets means re-targeting website visitors and previous customers as a fantastic thing to do on Facebook .It is very very profitable because of that a lot of people spend a large proportion of their total Facebook ad budget on re-targeting people but that’s not something that you want to do. Re-targeting lists whether it’s website visitors customer email list something like that are usually relatively small.Usually a lot lot smaller than cold audiences and because of that you can’t spend too much money. If you try and spend 25-30 percent of your total budget on re-targeting you’re likely to see that frequency number just shoot through the roof .You could end up with frequencies of 10-15-20 after just a couple of weeks .So I’d recommend take a pretty small proportion of your budget and use that to retarget now. If you do you know if you check your campaigns after a couple of weeks and you can see the frequency isn’t that high. Then maybe you can increase your budget but just one thing to watch out for in terms of preventing Facebook ad fatigue is to keep those budgets relatively small when you’re doing your re-targeting.

Finally technique number seven is to create holiday themed ads so this automatically refreshes your ad creative. If you’re tying your products to a specific holiday whether that’s Christmas or Valentine’s Day or Easter or whatever it happens to be you can only run those ads for so long probably and only a couple of weeks. But with most of them a couple of weeks before that your holiday and so that there’s not your ad isn’t live long enough for your target audience to start to become bored with it.When things are holiday themed people do pay more attention to it .I definitely recommend that you give that a go it’s a great way to prevent a dirty and it’s a good way to boost the overall performance of your Facebook ad campaigns as well so just for you go there’s something.

I hope the above pointers would be useful for your Facebook campaign.

Let me know in the comments section if there is any other method which i may have missed out .